Wooden stick matches (AKA safety matches) may be used to ignite fires and are therefore often associated with arson scenes that sometimes also involve homicide. They may vary in type based on their usage (e.g. kitchen matches; waterproof; and wind and waterproof matches). These variations will usually yield differences in the chemical makeup of the coating that is on the matchheads and sometimes in the physical shapes of the matchheads as well. Wooden stick matches are mostly encountered at fire scenes as burned matches. Partially burned or unburned matches are also possible, and sometimes whole, unused matches are found. The sticks of wooden stick matches may also be broken leaving behind a partial wooden stick match. Because a perpetrator usually does not expend an entire container of wooden stick matches, the source of the scene matches may still be in the perpetrator’s possession.  Therefore, a comparison of physical and chemical features between the scene matches and those in the perpetrator’s possession may be performed. The first examination involves a visual comparison of matchhead color if unburned or partially burned matches are present at the scene. If the colors are different, then no further comparison is necessary and the matches are considered to be excluded as being from the same source. If the matchhead colors are similar, then an examination is conducted to determine if there is a physical association (AKA physical match/physical fit) between evidence left at a scene and evidence associated with a potential source. A physical association is the strongest conclusion possible in wooden stick match analysis. If no physical association is found, then examinations and comparisons of other physical features such as the overall lengths, stick shape, stick color, and shapes of the matchheads are conducted. If these physical features are similar, a chemical examination of the matchheads is conducted. Such an examination may be done on the matchhead coating using Fourier Transform Infrared Spectroscopy (FTIR). Additionally, the matchhead components may be examined using Polarized Light Microscopy (PLM) and/or Scanning Electron Microscopy – Energy Dispersive X-Ray analysis, or other microscopical and elemental detection techniques. Although most wood used to make wooden stick matches tends to be either pine or aspen, the wood type of the sticks from the scene and the potential source may also be compared. Wood analysis is a technique that is usually outsourced to laboratories that specialize in such examinations. If at the end of these examination steps, there are no observable differences between the scene evidence and those associated with a potential source, then the matches cannot be eliminated as having originated from the same source. Because wooden stick matches are produced in large numbers, the comparison of wooden stick matches does not yield a positive identification to a specific source.

Figure 1: Matches from Scenes and Suspect 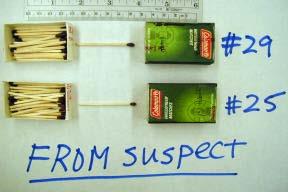 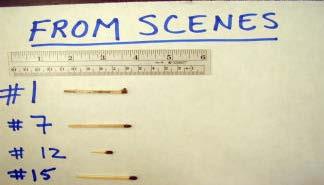 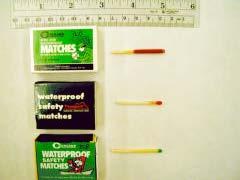 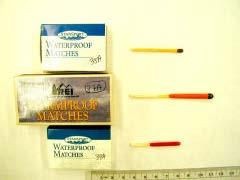 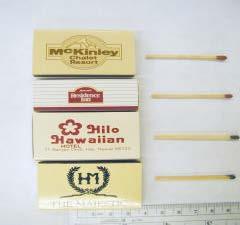 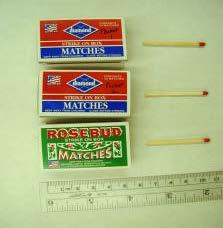 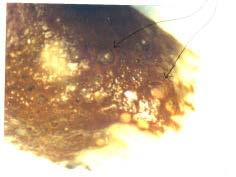