Contributed by Will Randle

Soil is one of the earliest types of trace evidence to be used in criminal cases. Unfortunately, today it seems to be an often overlooked piece of evidence. However, when recognized and collected, its use as class evidence can provide valuable links between victims, suspects and/or crime scenes. Soils exhibit a wide range of characteristics useful for comparison that depend on the geological and environmental histories as well as human activities at each particular location. The first known case where soil was used in helping solve a crime was in 1904 when German scientist Georg Popp examined soil collected from the trousers of a murder suspect. Two distinct soil samples from the trousers were collected. One sample was consistent in mineral composition to soil from where the homicide victim was found. The second soil sample was consistent with soil collected from the pathway that connected the crime scene to the suspect’s home. When shown how the soil evidence tied him to the murder, the suspect confessed.

Soils can consist of minerals, vegetation and man-made materials. Trace examiners typically study and compare the mineral portions along with any man-made materials such as glass, paint and building materials. Soils are compared using color, size distribution and mineral composition. Color is assessed visually using dried soil samples. The color of each soil can be characterized using Munsell Color Charts. When the samples are adequate in size, they are sieved using a series of metal screens of known mesh size; each successive sieve is smaller than the sieve above it. Each sample than is separated into 3 or 4 sized fractions. The fractions are than weighed and the percent weight of each fraction calculated and compared. Soils from the same location will show similar size fractions unless the questioned soil sample lost some of its original components. The next step of the comparison is the examination and comparison of the mineral make-up of the soils. The minerals contained in 100 or 150 mesh sieved fraction are used for the mineralogical study. Heavy minerals, such as zircon, epidote, hornblende, garnet and many others, are frequently used for the comparison as they exhibit greater diversity and are more likely to vary between soils from different locations. Lighter minerals such as quartz and feldspars are common in soils and are less useful in differentiating soils. The heavy minerals can be separated by adding the sieved soil to bromoform. The heavy minerals will sink and the light minerals will float. The collected heavy minerals are then examined using the polarized light microscope. The various minerals are counted as to the types present. Soils of the same location will exhibit similar mineral profiles. 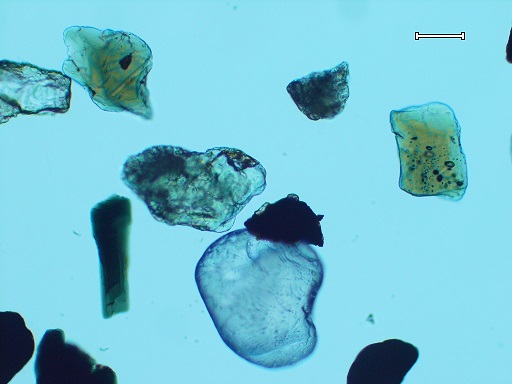