In the course of vehicular accident investigations, the concern of whether the vehicle’s lights were illuminated or not often comes into question. The most obvious circumstance is apparent right of way violations when it is dark. Other situations also raise the controversy, such as head on collisions at night, turns without indicators, and motorcycle accidents, where the law requires continuous headlamp illumination on the motorcycle. In the case of rear-end collisions, it is sometimes argued that the vehicle hit did not have its brake lights or tail lights illuminated.

The request for examination is not only limited to motor vehicles. It can also arise in marine accident investigations involving boat lighting or buoy/channel lighting, or even in assault investigations where it is questioned whether the room’s lights were on or off.

With incandescent lighting, the question of whether the lamp was illuminated or not at the time of a forceful impact can often be answered by laboratory examination. The examination involves observation of lamp abnormalities, either by macroscopic examination or, more often, microscopic observation. Based on basic principles of physics (inertia) and chemistry (oxidation), the abnormalities observed indicate the condition of the lamp at the time of the impact that produced them. If there are no significant abnormalities observed, no direct conclusions can be reached.

Hence, observation of the damage to a lamp filament produced by a forceful impact will often provide an indication of whether it was a.) hot and ductile versus cold, rigid, and brittle and b.) oxidized or not, if exposed to oxygen due to a fracture of the glass envelope. Deformation when hot results in uneven coil spacing, typically accompanied by arching of the filament coil. If the glass envelope is fractured, other indications of the filament’s temperature at the time of impact may also be present. A heavy tungsten oxide deposit forms on the surface of an incandescent filament, giving it a black appearance as opposed to the normal metallic luster. A different form of tungsten oxide is often deposited on cooler surfaces of the lamp, appearing as a white or yellow powder. If the lamp’s filaments were off when the glass envelope breaks, little of these oxides appear. Furthermore, an incandescent filament is extremely hot and minute fragments of the bulb’s broken glass will sometimes fuse and melt onto the filament’s surface. These deposits may be clearly seen with light or electron microscopic examination, and can even be chemically analyzed and characterized using a scanning electron microscope in conjunction with an energy dispersive X-ray spectrometer. If the filament was off, and cold, the glass fragments would simply bounce off the hard metal filament.

Sometimes, the inertia of the filament coil will be sufficient to cause a separation in the filament. Observation of the resulting abnormalities can also provide an indication if the lamp was on or off. If the lamp was on and the filament hot, it may be stretched and necked down to the point of separating. At that point a small high temperature electric arc occurs between the separated ends, sufficient to melt the tungsten metal. This leaves a small bulbous tip on the end of the necked-down filament. In the case of quartz-halogen headlamps, the filament assembly is much more rigid and the hot separation is typically not accompanied by a reduction in the wire’s diameter and has much larger bulbous tips. Conversely, if the lamp was off and the filament cold, it may fracture at a weak point in the wire. The resultant break has a very angular fracture surface, with no reduction in the diameter of the wire. The amount of force required to produce the latter is much greater than that for the former.

Normal lamp burn-outs produce a filament separation that somewhat resembles the hot separation in quartz-halogen headlamps described above. They, however, are not accompanied by filament distortion. 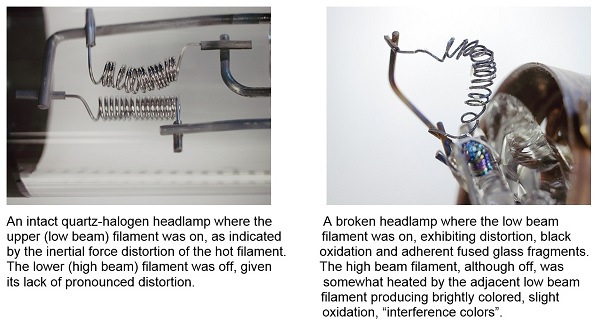 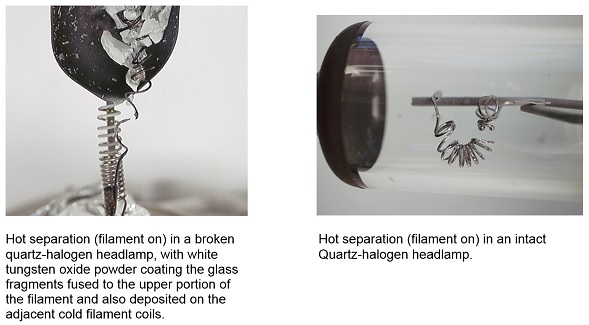 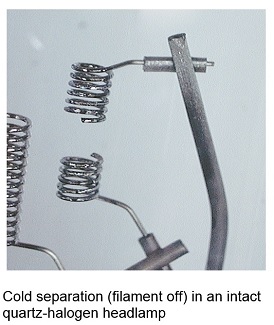 There are limitations to the analysis. First of all, the impact must have been of sufficient force to produce abnormalities beyond those typically observed in new and in-service lamps. Second, there is no analytical way of knowing when the impact producing the abnormalities occurred. Third, the duration that the lights were activated cannot be determined by lamp examination. Consequently, the lights may have been turned on a second before the impact in question. And finally, conflicting indications resulting from multiple impacts or tampering with the lighting circuitry following the accident may produce uninterpretable observations. Fortunately, the latter are typically recognizable based on observed lamp abnormalities.